Giving A Rooster A Bath. SAY WHAT??!!

Ok, so yes, we did give our rooster a bath. Let me back up a bit  though and start at the beginning.
We had 2 Welsummer roosters for our 29 hens. The roosters were raised together as chicks and got along very well until one night when I walked into the coop and it looked like a blood bath. There was blood, and lots of it, all over the coop, the feeders, even the hens were covered in blood and both roosters were bleeding badly. The hens were overstimulated by all the blood and were now attacking the bloodied roosters. So we took the roosters out of the coop and separated them from each other.

When I headed back into the coop the hens were now attacking each other because they were attracted to the roosters blood that was covering their feathers. So on a freezing cold night Don and I were out there for hours using the goat brushes to comb the blood off the feathers of 29 hens. The next day I brought one of the roosters into the house thinking that if I could wash the blood off of him the hens would no longer attack him. He was so awesome through the whole bath. I really adore these Welsummer roosters and it will break my heart if I have to put them both in the freezer.

After his bath we dried him off and took him back out to the coop a few hours later. It didn't work, the hens attacked him straight away. Onto plan B. I grabbed some Poultry Wound Spray which has Tea Tree oil and other smelly things in it and Fooey, which is a bitter tasting spray meant to keep dogs from chewing things. I sprayed his comb, the feathers around his head and his wattles with the two sprays to keep the hens from pecking at him. Realizing at this point that this whole thing happened because these large breed, free range birds, do not do well being stuck in the coop but our girls refused to go out in the snow. So after getting the rooster all sprayed up with this stinky "cologne" to hide the smell of the blood we shoveled an area and spread old goat bedding hay over it in the chicken yard. I threw out a bunch of scratch grain to entice them and they had the whole area under the coop to explore. They were still refusing to come out so Don tossed them out the hatch one at a time, all 29 of them. Ugh!

The good news was that it seemed to work. The hens were so happy to be able to take dust baths under the barn and scratch in the hay for the scratch grains that they completely ignored the rooster. Until, that is, we locked them all in the coop that night. After we finished all the chores we went in to the coop to check on him and he was hen-pecked and bleeding. We put him back out of the coop for the night and today we are repeating the experiment of spraying him with the smelly, bitter sprays and leaving him out with the hens in the outside run. So far it is going well again today and we will keep him out of the coop at night for a while to protect him from the girls. The things we go through to try and hang onto this rooster. The other rooster is currently living in the goat section of the barn and sadly he will likely end up in the freezer. 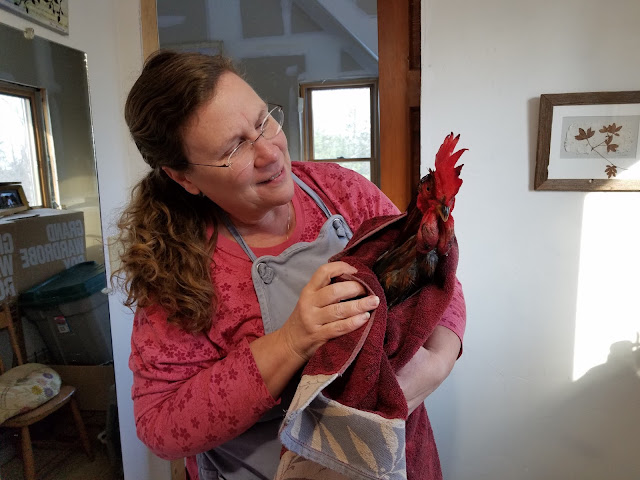 Me telling him it will al be OK. I'm not sure he was convinced! 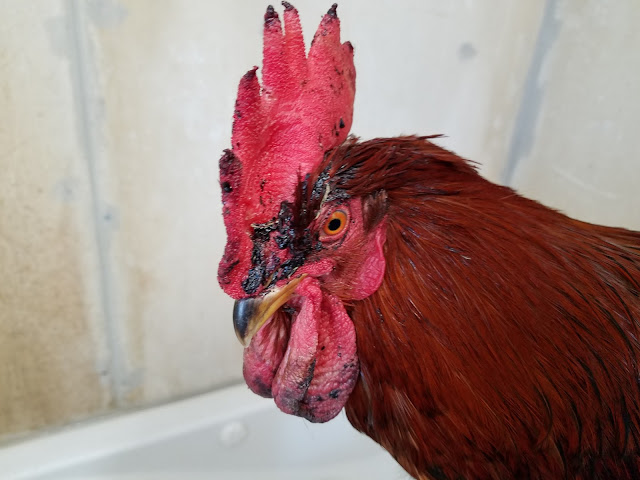 Before the bath. You can't really tell in the photo but his feathers were coated in blood. 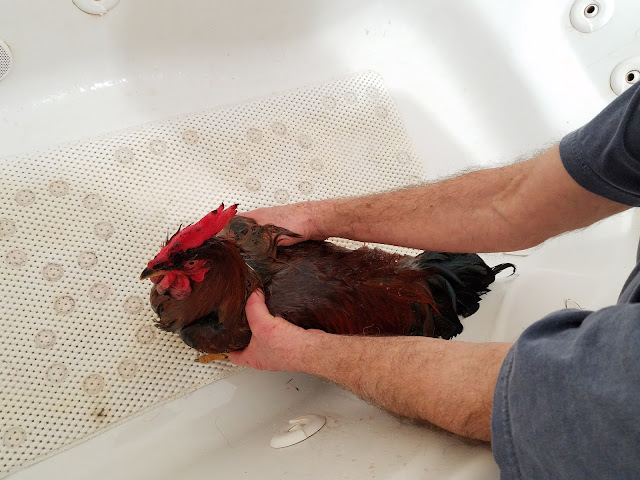 He was so good during the bath. I just adore these Welsummers for their beauty and temperament 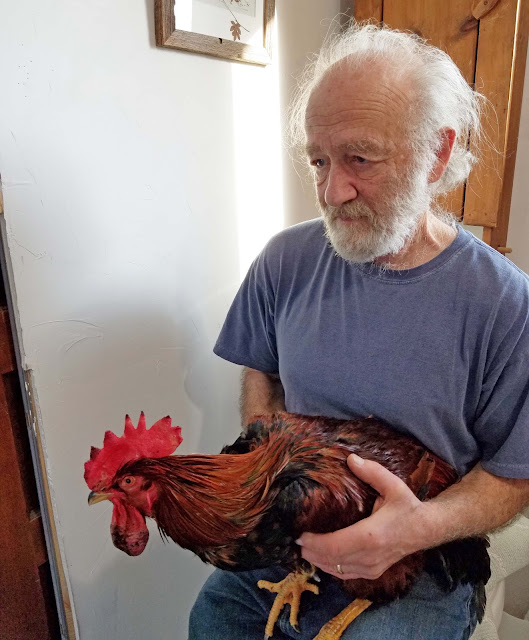 After the bath, getting dried off 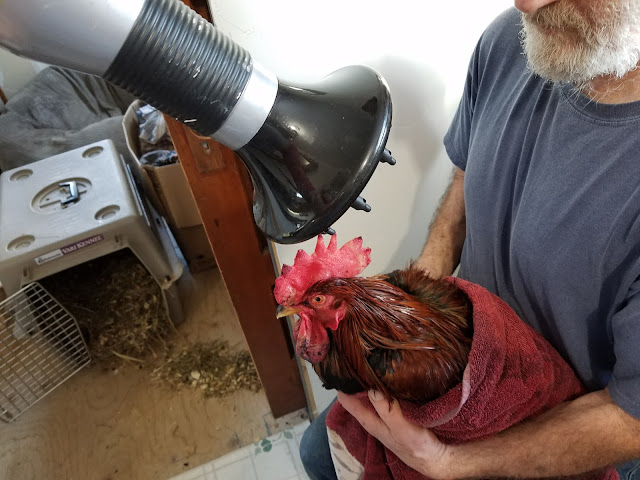 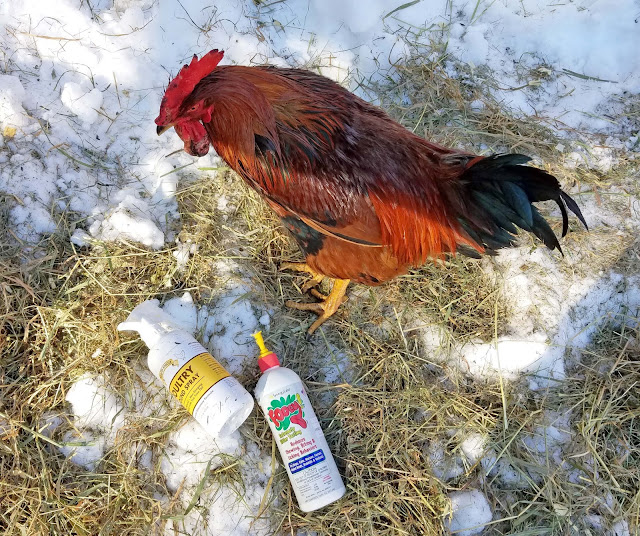 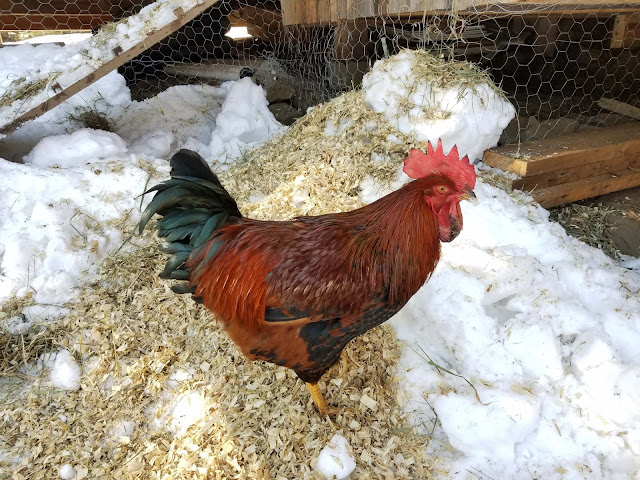 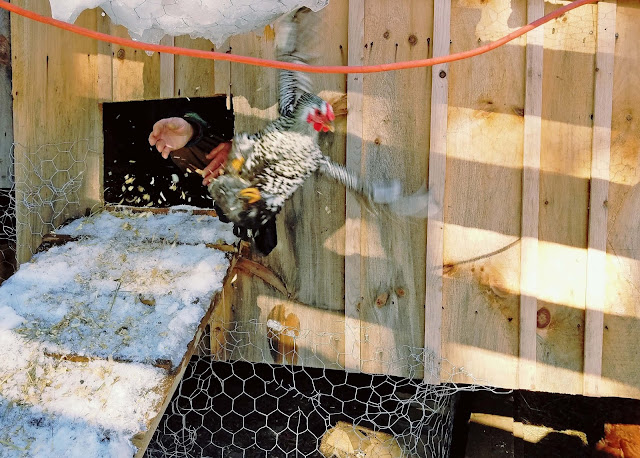 Don convincing the girls how much fun it will be to be outside in the fresh air. Needless to say they were not convinced and had to be "helped" out the door one by one. Happily the second day they all came running out on their own. 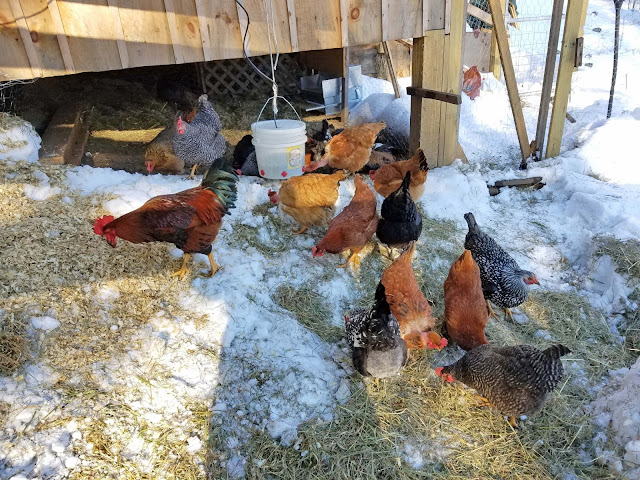 The rooster with his happy hens. No hen-pecking going on while they are outside. 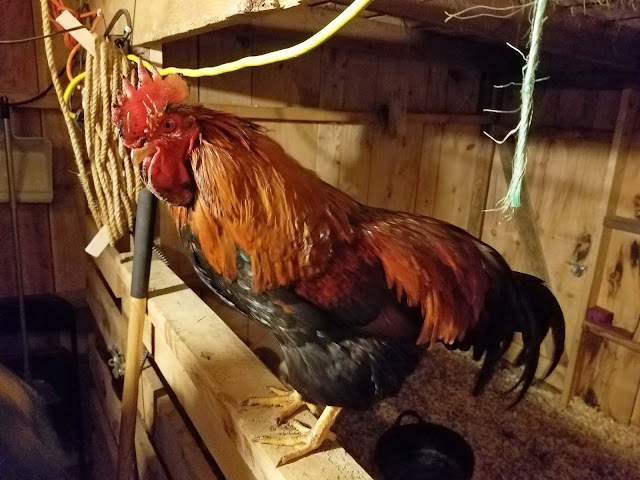 This is the other rooster. He is still a bit bloody as he has not had a bath like his brother has. He is currently living in the goat section of the barn.
Posted by Linda Marcille at 12:52:00 PM No comments:

Our Eggs at Putney General Store!

Today we delivered 7 dozen of our eggs to the Putney General Store in Putney, Vermont. Our hens are free-ranged in the woods in good weather and they are fed a 100% organic diet. We are very happy to have been given such a wonderful reception to offering our eggs for sale at this local store. 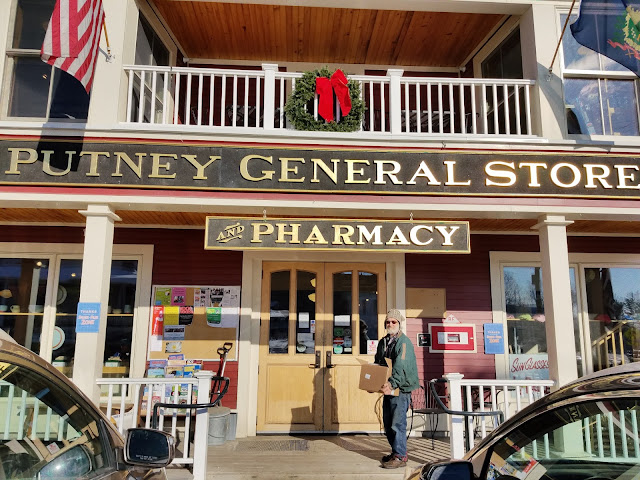 Don carrying in the box with 7 dozen eggs. 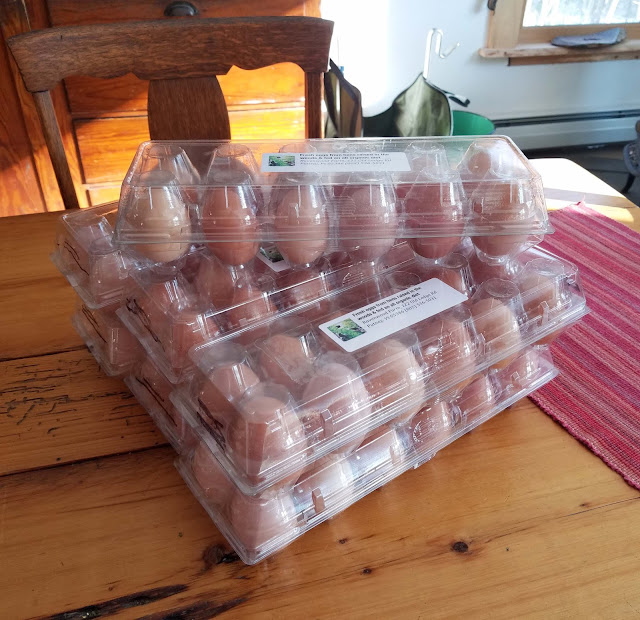 Save your plastic egg cartons for us! We will reuse them with our eggs.  PM me and I will give you an address you can mail them too. The plastic ones work well because the old labels can be easily removed so that we can put our info on them. 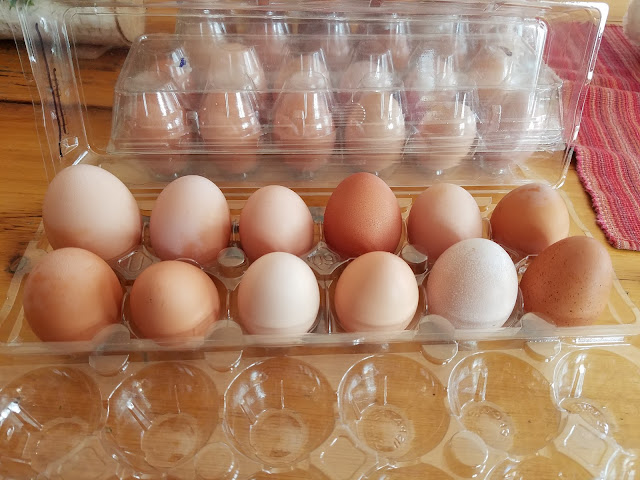 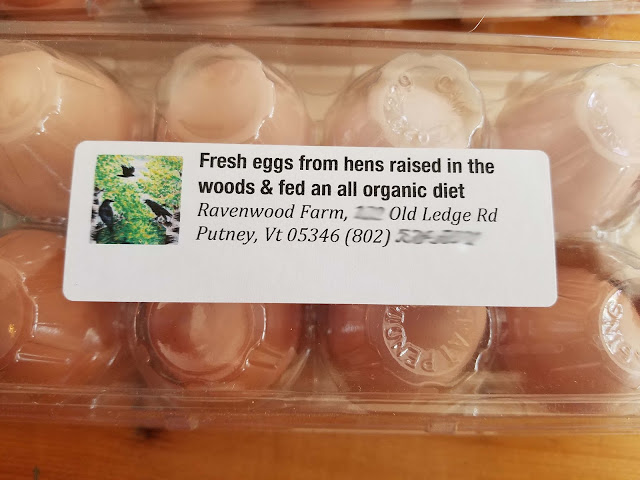 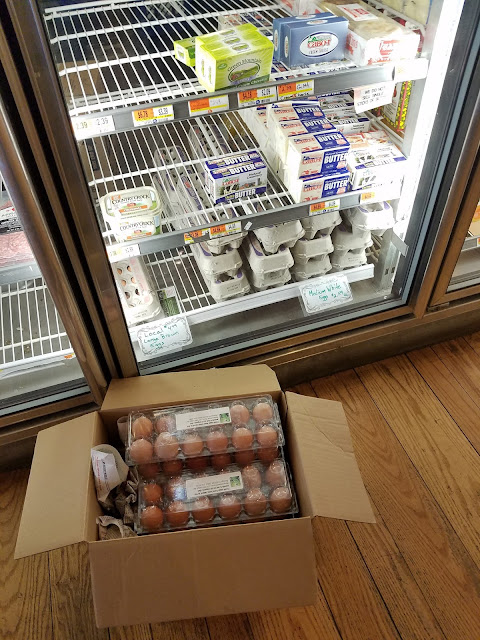 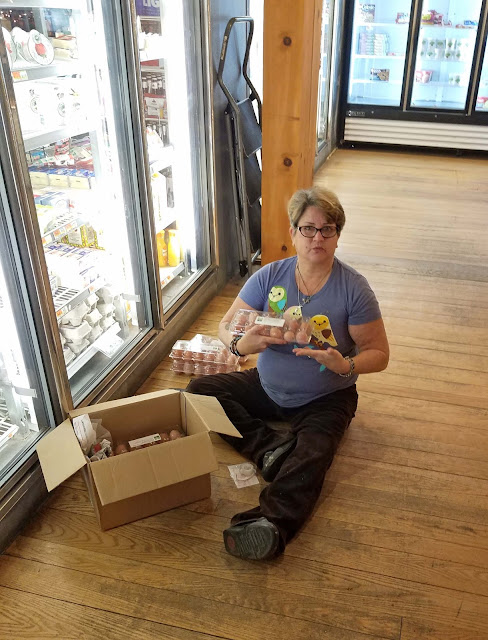 Beth modeling our eggs so elegantly before she puts them in the cooler ;-)
Posted by Linda Marcille at 2:18:00 PM 2 comments:

I finally finished the custom order for 5 paintings of monarch butterflies on tea bags. Here are some photos of the process and the finished paintings. I received an order for 2 more from someone else yesterday. I may paint some extras to put in my Etsy shop. 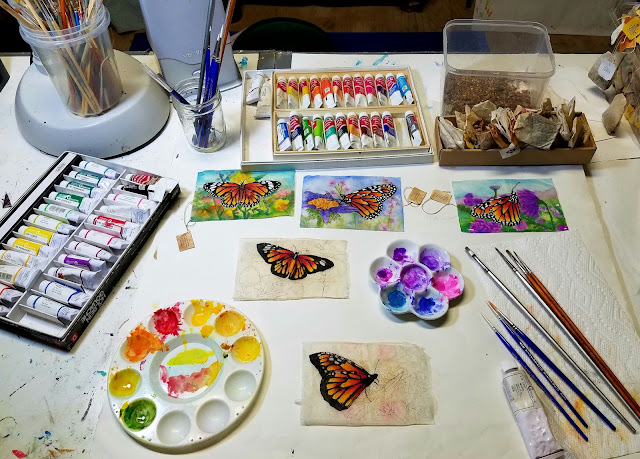 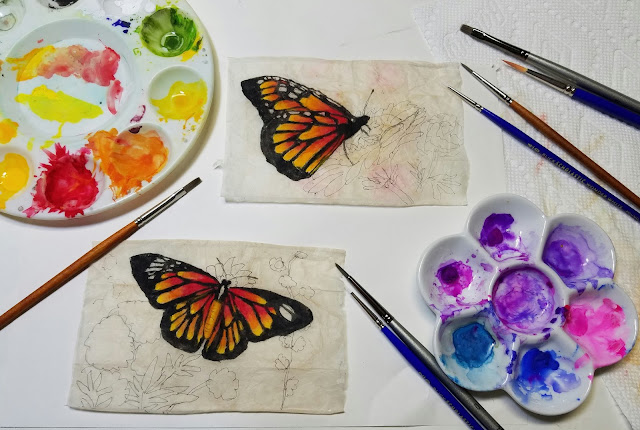 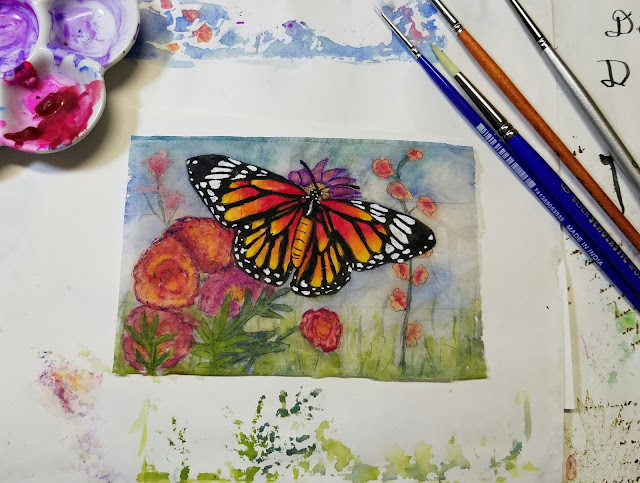 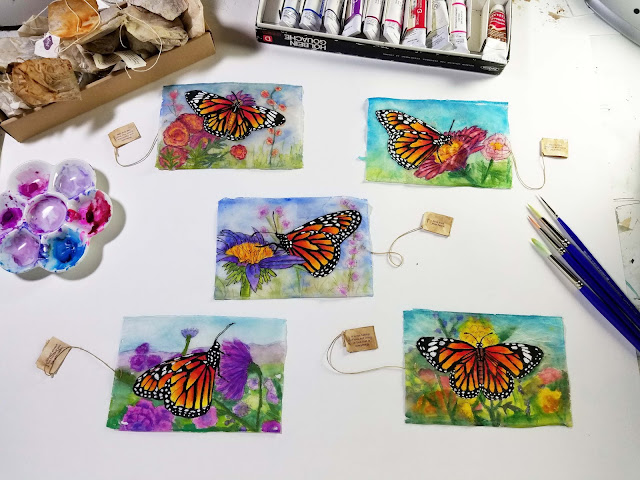 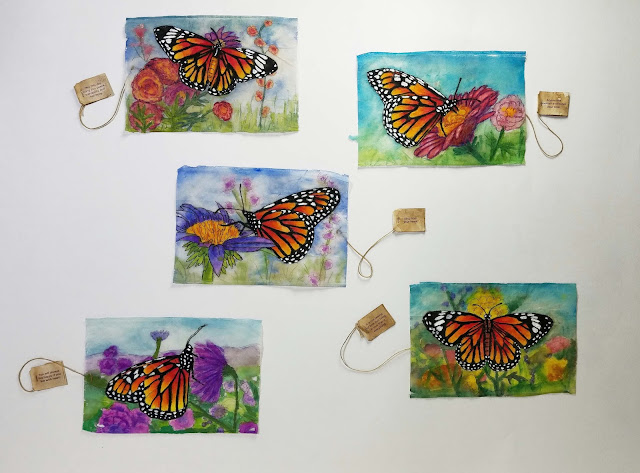 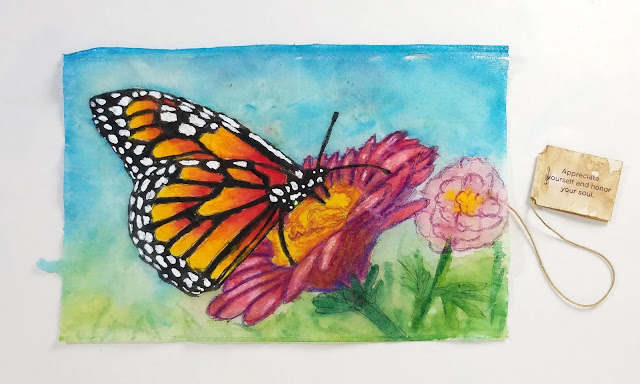 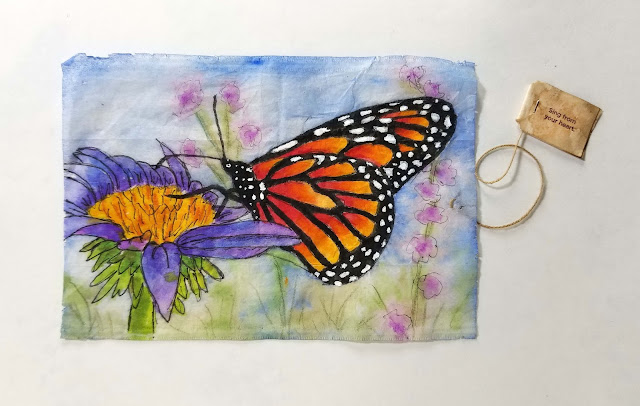 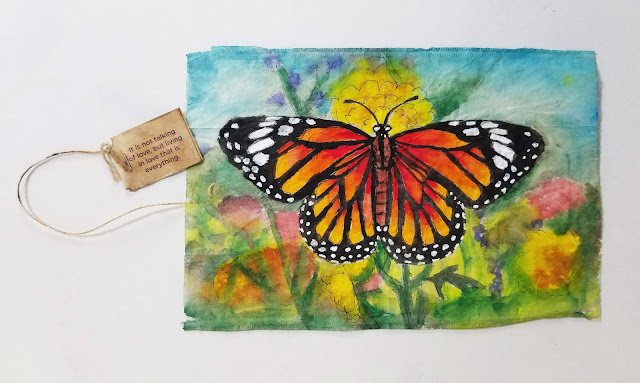 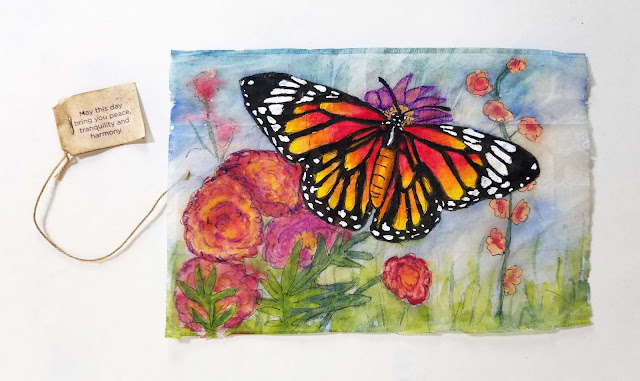 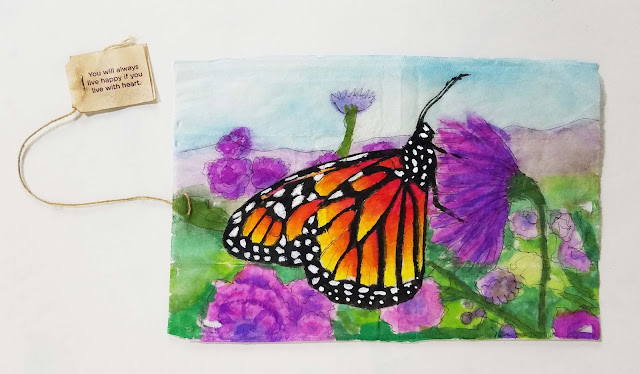